Why I “downgraded” to RoboBrew

My journey in all grain homebrew beer has been somewhat different from most. I started my first brewing with a three vessel all grain setup and I’ve looked to simplify my brewing, which has led me the RoboBrew.

The traditional path in homebrew is to start with kit brewing – the just add water approach to beer making – then move onto extract brewing where they get greater control over flavour through adding their own hops and adjuncts, later perhaps using partial mash brewing as a gateway into all-grain brewing.

I had little interest in this. Several years earlier I’d fallen in love with the microbreweries that are a staple in even the smallest town or neighbourhood throughout the United States. And so I started painstakingly researching the best systems and methods for brewing like these guys. I started compiling a list of parts needed for a fairly bare-bones three vessel system. Even keeping costs to an absolute minimum and avoiding the temptations to go all-out with Blichmann gear, the brewhouse system cost the better part of AUD$1,000. It featured a stainless steel pot with the ubiquitous STC-1000 temperature controller for an electric HLT, a bazooka screen fitted esky/cooler mash tun and a large gas burner and pot for brew kettle.

In the end I did splurge on a Blichmann conical fermenter. Blame it on sitting around all that stainless steel in microbrewery taprooms across America. Another AUD$1,000 or so was spent on fermentation and temperature control.

It’s of course worth pointing out at this point that that picture above is not my brewhouse!

I meticulously planned my first brew. I’d read every brew day blog and forum topic I could get my hands on and knew intimately some of the many things I needed to look out for. The day came and though I ended up with less of the final product than I’d planned and hands that smelt like hops for days, I produced a pretty good first beer. I kept going and gradually the brew days became easier, the beers improved (with one or two forgettable brews along the way) and the process became second nature. 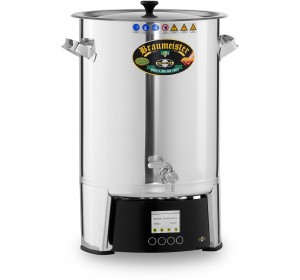 The Braumeister is undeniably the pinnacle of automated, single vessel brewing.

But one thing that comes with traditional three-vessel brewing is a huge amount of preparation and cleanup. The process is incredibly involved and at times physically demanding. The desire to keep brewing very much stayed alive, but the time to put towards preparation disappeared and soon I became drawn to the Speidel Braumesiter systems. I spent many months reading the ins and outs on these beautiful machines and came to wish that I’d started my brew journey this way.

I never purchased a Braumeister. Initially it was the 50L model I had my eye on, the AUD$3,500+ pricetag the very obvious thing holding me back. I eventually settled on the AUD$2,500+ 20L version. But personally as someone that drinks only socially, the $2,500 (plus accessories!) is a lot to spend on maybe six or seven brews a year.

The Grainfather came along but never truly piqued my interest. I was still sold on the German engineering and automation offered by the Braumeister, particularly with the revised control system that debuted on the 2015 models. Even though I’d never done a stepped mash before I had convinced myself that this was necessary for the best efficiency and best beers.

Then the RoboBrew came along. At first I saw a glorified urn with a built-in STC-1000. No automation of temperature and timer control was the killer for me. But that sub-$500 price tag made me think. Even if it’s a complete dud of a single vessel brewing system, I’d have an urn for sparging or speeding up back-to-back brews. With a few cheap modifications to include a recirculation system (namely a $25 12v “brown” pump) it has the basic functionality of the Grainfather at half  the price.

There’s no automation as such, but it’s widely understood that the well-modified grains sold today simply don’t need the steps to maximise efficiency. My brewing up until this point managed without and I’d never bothered to truly understand the science, so spending five times the price tag of the RoboBrew on a Braumeister was starting to make less and less sense. If I really want to do a stepped mash, then I simply need to do it the old fashioned way – with a timer and one eye on the system for an hour or so.

Three reasons to downgrade from three vessel to RoboBrew

A beginner’s guide to recirculating wort

RoboBrew immersion chiller to the test