The Grainfather is perhaps the most commonly found turnkey brewing system in Australian homebrew shops. At a price of $1,150 it offers a wide number of advanced features. It is designed to produce the same amount of finished beer as the RoboBrew which retails for $449.

It’s no secret that the Grainfather is a more advanced and complete brewing system. There’d be no point in telling you that the two systems are on par, because you only need to look at them or see the pricetag to know that there’s some key differences. At their core, the RoboBrew and Grainfather are somewhat similar. They produce the same amount of beer, they’re roughly the same dimensions and feature the same heating capabilities:

The Grainfather offers a wide range of accessories and add-ons that are able to improve and extend the functionality of their system, while the RoboBrew is offered as the basic temperature-controlled urn and malt basket. As a result, the Grainfather does feel like a more completely designed brewing system from the get-go.

The key difference between the two systems is the Grainfather’s inclusion of a pump and associated fittings for recirculation. Any recirculation system on the RoboBrew is something the end user has to design, test and perfect.

The fact that the Grainfather has been designed from the ground up to handle recirculation is a key distinction. The designers have used pumps and plumbing that work ideally for the size of the system. Importantly too, the system features a mesh top on its malt tube that ensures an overflow of wort from the malt tube will not wash grain into the kettle, keeping wort clear from debris.

Both systems include a wort chilling system that use tap water to quickly cool the wort from boil to fermentation temperature.

The RoboBrew features a simple stainless steel immersion cooling coil, this has the benefit of being able to be placed into the wort during the last few minutes of boil to use heat to sanitise it.

The Grainfather features a couterflow chiller. It too can be sanitised using the boiling wort: simply recirculate boiling wort through towards the end of the boil.

The newest feature for the Grainfather is the Grainfather Connect upgrade. For an additional $199 this system allows for Braumeister-style complete control of the brew (from your smartphone) including stepped mashes with a PID controller that allows the power used in the system’s elements to be adjusted for far more accurate temperature control. Both the standard Grainfather and the RoboBrew use similar temperature controllers that simply cycle on and off to maintain temperature; a method that can be somewhat hit-and-miss.

Though there are still several steps with the mashing and brewing process that require hands-on intervention, such as removing the grain and sparging, the Grainfather Connect does bring the system in-line with the Braumeister in terms of automation.

The price difference between the two systems puts them into very different categories. One is a water urn and malt basket, the other is a carefully designed turnkey brewery. An attentive brewer can certainly brew the exact same quantity and quality of beer with either; it really comes down to just how hands-on you want to be on your brewday. 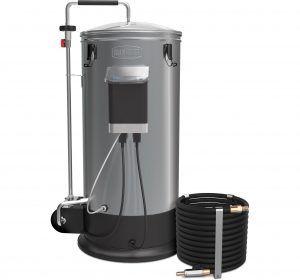 The RoboBrew can certainly be modified to add recirculation functionality; it’ll take time and money – though almost certainly not the  $700 that separates the two systems – but it can be done. You’ll need to address issues of flow control and what to do in the event of a malt basket overflow.

Should I Upgrade to a RoboBrew Generation 3?

Old versus new — comparing the Robobrews